Nature and architecture in dialogue

The renovation of t he Cavo Zoe Sea Side Hotel in Cyprus is a great example of Puro Plus Natural being used as a material that communicated with nature.

The renovation of t he Cavo Zoe Sea Side Hotel in Cyprus is a great example of Puro Plus Natural being used as a material that communicated with nature.

“The philosophy behind this conversion is that the façade of the building blends in totally with its surroundings, says architect Christos Paraskeva from C+ Studio Architects. “In Cyprus, those surroundings are mainly rocks and Puro Plus Natural is ideally suited to the task.” The texture and colour palette of the Puro Plus Natural panels enters into dialogue with the environment in just the way you want. “We would not have been able to achieve the same effect with a different material,” he continues. “Puro Plus Natural has the appearance of rock or concrete, but is much easier to use and maintain plus it is a good deal less expensive financially speaking than these other options.”

Easy & fast installation The fact that Puro Plus panels are also easy to install also played a role in the choice of cladding to be used for the façade. “When you only have 3 to 4 months to do a thorough renovation, that kind of feature is inestimable,” explains the architect. “The hotel had to be ready to receive guests from the beginning of the tourist season. Also, add the ability to install Puro Plus invisibly on a freestanding substructure and you begin to understand our enthusiasm for it! Having a tight time schedule meant we could not allow ourselves to have any problems of the kind that tend to crop up on a renovation project, such as unexpectedly slanting outer walls or unsuitable materials for fixing the panels in place. But the method of mechanical fixing on a separate structure meant that we could be sure of not having any unpleasant surprises.” “Having the project complete in barely 4 months was a real tour-de-force!” “Everything went entirely to plan and also on schedule. Which is not always as straightforward as it may sound,” added Christos Paraskeva: “With an in-depth renovation like the one at the Cavo Zoe Sea Side Hotel, delays are not unusual.” Not only was the hotel given a new façade, but it was also totally rebranded, from a budget hotel to a five-star boutique hotel.

Luxury Hotel “Achieving something like that in barely 4 months was a real tour-de-force,” recounts the architect with some pride. “We created a link between two separate sections of the original hotel, playing with the different heights on the façade.” 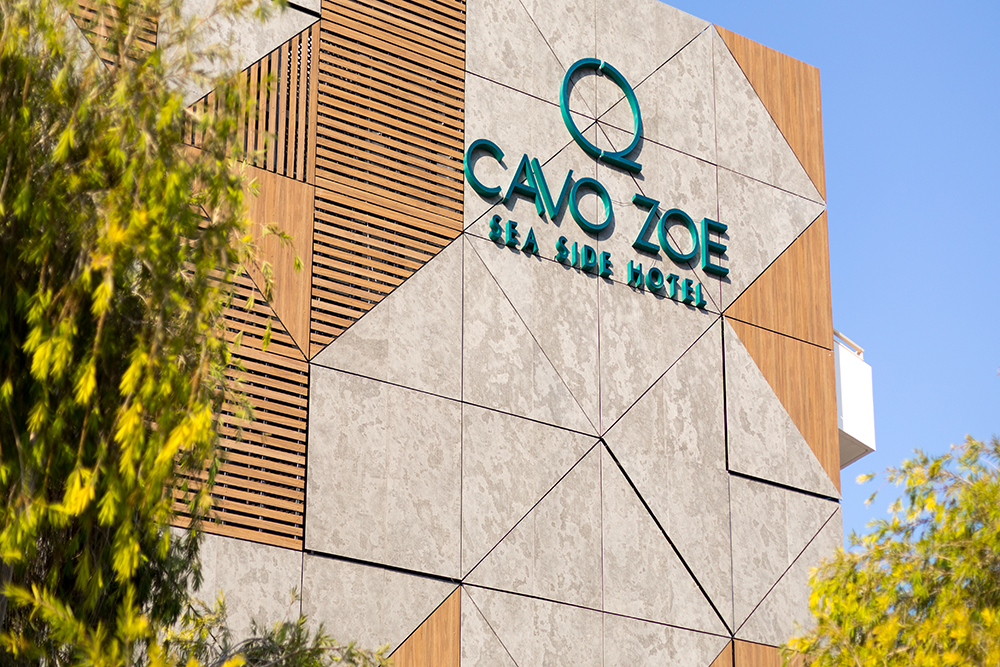 Fortunately, Puro Plus Natural lends itself very well to a bit of creativity. “Because the material is so light and easy to saw, we were able to be very creative with it. For instance, we incorporated lighting strips into the frontage to reflect the way the sun and water play on the rocks in the evening.” And all that was possible because the new owners of the Cavo Zoe Sea Side Hotel gave C+ Studio Architects all the creative freedom they needed. “The owners are Chinese and for this project in Cyprus, they placed total faith in our Cypriot architects. Their only condition was the amount of time we had and to requirement to produce a luxury finish. ‘Make it the best’ is all that they told us to do,” laughs the architect. And anyone who looks at the photos of the hotel can see that Christos Paraskeva and his team did indeed ‘make it the best’.